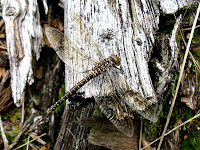 A good day for picking mushrooms in the forest. Of course I can´t leave out the exciting moths and dragonflies. I manage to catch a male and a female Blue Hawker. Quite gorgeous creatures!
Upplagd av Daniel kl. 10:43 1 kommentar: 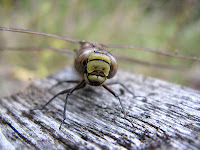 and what a snout!
Upplagd av Daniel kl. 10:34 Inga kommentarer:

You see a lot of good, interesting, mysterious stuff on a forestroad walk. What is this creeping little brush? As far as I´ve found out it is in fact a Muslin Moth (Diaphora mendica) or in swedish Grå tigerspinnare!
Upplagd av Daniel kl. 10:30 1 kommentar: 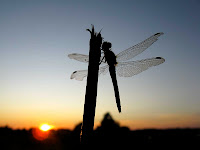 25:th of September
A couple of Dragonfly-species still fly in reasonably good numbers. The wetlands of Kvismaren is a good place for them. I have to share this one with you even if it´s hard to see what species it is. (I have yet to find out myself) As you might already have noticed, I´m a sucker for sunsets and seriously, how many really good sunsets do YOU see each year?
Upplagd av Daniel kl. 05:19 Inga kommentarer:

25:th of September
Lake Kvismaren in Närke is just an hour drive away from Svartådalen and a real magnet for birds. Tens of thousands of Bean– and Greylag Geese, hundreds of Barnacles and odd numbers of the other Geese including even a flock of Lesser Whitefronts, was observed by some other people today.
On a gorgeous day like this it´s a truly wonderful place to be. We see raptors practically everywhere we´re looking and ten species are easily found, several Hen Harriers, Sea Eagles, Rough-legged Buzzards, add to that Merlin, Peregrine and even a possible juvenile Pallid Harrier. Not seen close enough though, but my experience tells me it was most likely one. (You know they are very similar to Monatgue´s Harrier in juvenile plumage)
The true final of a day´s birding in Kvismaren is of course when the 10.000 (!) Cranes staging in the area, fly in to their roosting site in the lake at sunset. Wow! is not enough word to describe it and unfortunately my pictures to show enough either. You just have to use your imagination to picture the sound and feeling of seeing so many, so big and so loud birds at the same time. Yes, many of you know already!
Upplagd av Daniel kl. 05:00 Inga kommentarer: 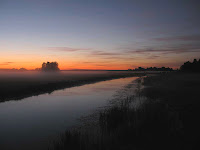 17:th of September
The last week has been warm and sunny and some of the around 2.000 Cranes staging in the area have used the thermals to start their migration southwards. On sunday a great flock of 100 Cranes highlighted our sunday walk on Björnön (the Bear island) with their trumpeting calls as they soared in the blue skies to gain height before crossing Lake Mälaren.
This evening we enjoy the sunset at Lake Fläcksjön, where 160 Cranes come in for roost at night. Just another great, warm, beautiful relaxing evening in the company of Cranes.
Upplagd av Daniel kl. 04:33 Inga kommentarer:

7:th of September
Grey, wet, drizzly day, but I can´t help drive out in the countryside to look at the Cranes. I count more than 1.000 Cranes in two big flocks. I find 4 colour-ringed individuals. The one I can identify directly is ringed by myself and friends, some 20 km away by the lake Gnien in 2006, we call her "Cariño".
This picture was taken on the occasion.
Upplagd av Daniel kl. 03:27 Inga kommentarer:

5:th of September
One of two great evenings at Lake Fläcksjön this week. We count 760 Common Cranes flying in for roost. What a spectacular event! My son Max Green got a picture on some of them.
Upplagd av Daniel kl. 03:22 Inga kommentarer:

30:th of August
Another, even better day for Raptor migration at Falsterbo. An Aquila-Eagle becomes the bird.. and the debate of the day. Initially called out as a Steppe Eagle when passing the canal, but reidentified as a Lesser Spotted Eagle when soaring at the heath – "Ljungen" a bit further south. Have a look at Jens B Bruun´s picture and you can easily understand why:
Several Pallid Harriers are called out during the day, as well as another potential Back Kite. I saw them but they all passed really high above. A juv and an adult female Montague´s Harrier hunts over the heath later in the afternoon and certainly do look much bigger-winged and buoyant flying.
Anyway, Falsterbo is a great place to be this time of the year.
Upplagd av Daniel kl. 02:49 Inga kommentarer: 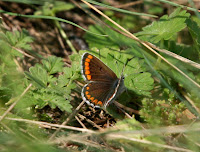 29:th of August –08
Falsterbo, the southwest point of Sweden, known for it´s concentrated migration of Raptors and Passerines. Today I date the birdartist Hans Larsson for a long interview-session for the Swedish bird magazine "fågelvännen" – the bird friend.
We meet up strategically at the end of the Falsterbo channel, which should be the best position with todays slight northwest.
We couldn´t have been more right because even if the Honey Buzzard and Sparrowhawk passage ain´t huge yet (about 150 of each) a Black Kite, plenty of Red Kites and an adult Black Stork passes right above us. Not too bad!
For a northern butterfly-twitcher it´s a nice moment when a Brown Argus (restricted nationally to this very southern part of Sweden) comes flying to perch in the grass just beside us for a little while.
Only Hans got a picture, so this is courtesy of him. Have a look at his own website with bird paintings!
Upplagd av Daniel kl. 02:32 Inga kommentarer: