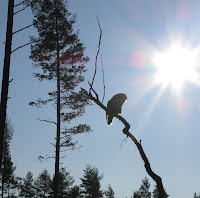 Some days things more extraordinary than other happens. Today was one of them. I was busy driving to collect stuff for a tourism-fair in Posnan, Polan, when a Ural Owl appeared posted on a clearing in the forest near the Black River Valley. I got out and approached it down to 10 meters before it finally took off. An abnormal behaviour, that in worst case could be due to starvation. Ural owls don´t almost ever perch in the open in daytime. I think I´ve seen that perhaps only twice in my life ver apart from at nestsites.
At the "Nutcracker Inn", 4 birds approached me instantly as I gave out hazelnuts to the. Such charming birds!
Upplagd av Daniel kl. 14:41