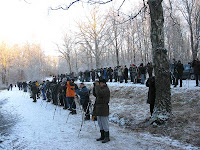 A new bird for Sweden – a Yellow-browed Bunting (Emberiza chrysophrys) – was discovered yesterday, on a feeding station just outside Stockholm. Being sunday and all, today became a major twitchday with hundreds of people from all over Sweden and even Denmark joining up to see it. Despite being very resident it skulked a lot on the ground, showing mainly short periods and behind grass and twigs and did not produce very satisfying views. In the afternoon many seem to have left with just short glimpses of it. Stunning little bird though with a bright yellow super. Hopefully better pics will be taken the coming days but so far here´s an example.
Upplagd av Daniel kl. 09:35

I heard this on the radio. Nice timimg by the bird!