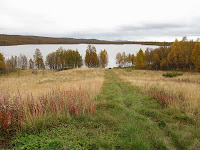 16:th of September 2009
One of the finest places around Bertejaure in my opinion is a hill with a cottage called Knallhatten´s. It´s surrounded by open meadows and then birchforest overviewing part of the Bertejaure lake system. It´s easy to imagine Hawk Owls and Butterflies around this place. As I look at a group of Velvet Scoters in my bins a big, Brown Trout is breaking the surface in a big leap beside the birds.
Upplagd av Daniel kl. 01:39