Pine Grosbeaks on the move 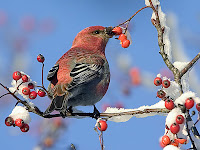 6:th of November 2010
Today Pine Grosbeaks were reported from 8 countys in northern and central Sweden. Only low numbers but still a noticable influx. 3 observations were made in Svartådalen and 2 birds even on my feeding station at Skillberg. We haven´t had a real Pine Grosbeak invasion since 2004 in central Sweden. The lack of berries this year might force them southwards but will they appear in numbers? and what will they eat? Picture by Stefan Oscarsson. See more of his excellent pictures on his own website!
Upplagd av Daniel kl. 11:52