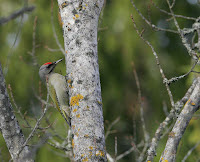 6:th of January 2008
It´s still just about about dawn. The nights snowfall has painted the forest white and sealed it with the silence only newfallen snow can create. Not many birds are awake yet.
We have just finished some new arrangements for feeding the Nutcrackers in a photographically optimized way and we feel like we have earned a first cup of coffee.
That´s when a tiny, but intense screem is reaching our ears. I look up in the dense spruce tree above me, and see two birds clenched to each other, just 2-3 meters up from me.
First I get the impression that the birds are the same size and I wonder what the hell two Willow Tits are fighting about, when 2 angry yellow eyes stares down on me.
It´s a Pygmy Owl, with a still live and screaming Willow Tit in its claws.
A second later the Owl flies away, disappearing into the dark green oblivion, leaving the inferno of helpcalling  tits behind. Then everything turns silent... dead silent.
A Grey-headed Woodpecker is already perched in its favourite breakfast treetop.
Great Swedish photographer Hans Bister took the above picture. See more of his excellent work on www.pbase.com/bister
Hans Bister is also editor of the Great Swedish birding magazine The Roadrunner. Especially for those who like rare birds and twitching. Reed more on www.club300.se
Upplagd av Daniel kl. 10:21